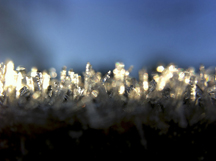 Any reputable scientific experiment should be replicable under similar conditions. When Dr. Masaru Emoto proved that thoughts and intentions create reality, the experiment has been replicated numerous times with similar results. The bottom line is that the words we use, in conjunction with the intent behind them and the emotion we are feeling while saying these words, will conclusively shape the reality around us.

Water Crystal Proof
n 1994, Dr. Emoto studied the differences in the crystals of frozen tap water, river water, and lake water but to no avail, he did not see any differences between tap water and the water from lakes and stream by nearby cities. What he did notice, however, is that water crystals from pristine lakes and streams created “beautiful crystals with each one having its own uniqueness”.

The observation was done in various ways:
1. Observe the crystal of frozen water after showing letters to water
2. Showing pictures to water
3. Playing music to water
3. Praying to water 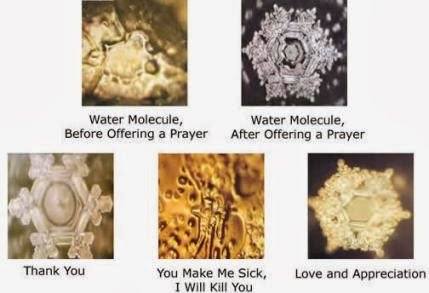 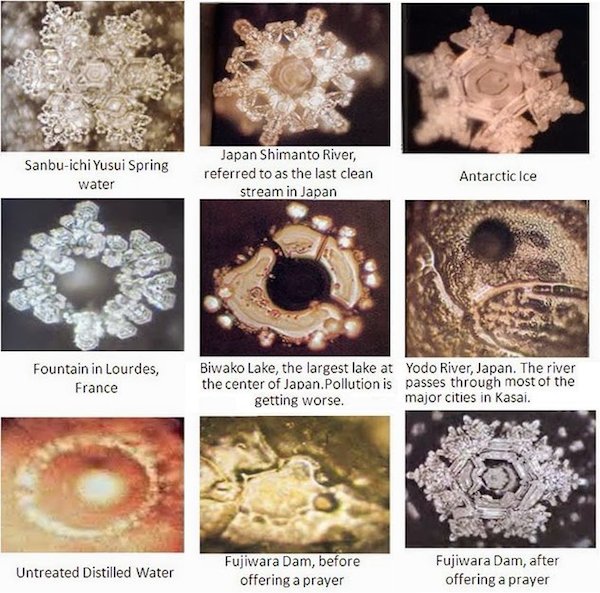 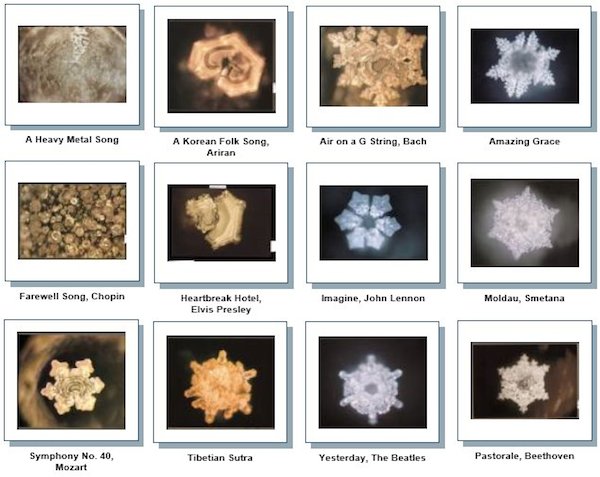 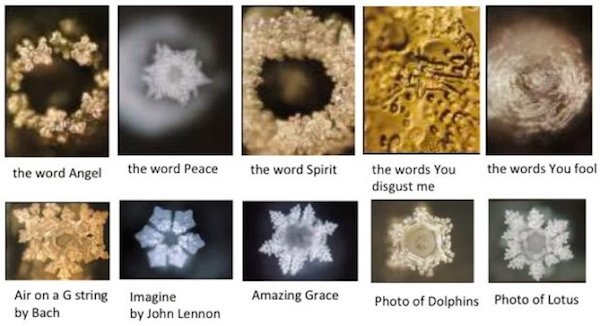 On November 16, 2005 Parapsychologist Dean Radin conducted a long distance experiment with Dr. Emoto and approximately 2,000 participants who focused long-distance positive intentions on water samples contained in “a double-steel-walled, electromagnetically shielded room” at the Institute of Noetic Sciences (IONS) in Petaluma, California nearly 5,000 away from Emoto. The participants were shown digital images of the bottles of water, and gave focused prayers of gratitude for approximately five minutes.

The treated (prayer and intention) and untreated samples were sent to Emoto’s lab in Japan where 40 unique water molecules were photographed. 100 volunteers evaluated the photographs and rated them on aesthetic appeal. The results showed that the water with prayer and intention resulted in “more pleasing crystal shapes” than water that did not receive this treatment (Radin et al., 2006). 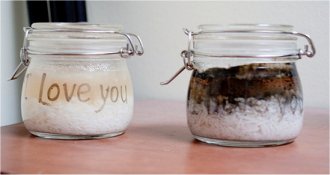 The Rice Experiment
In another experiment to prove how words, thoughts and intentions affect our reality, Dr. Emoto placed cook rice into three containers. On one container, the words “Thank You” were written. On the second container, he wrote, “You Fool” while the third container was completely ignored. Children were instructed to speak aloud the words on each jar, daily, when they walked by them each day. At the end of 30 days, the rice with the words, “Thank You” was relatively unchanged while the rice with the words, “You Fool” turned black. The rice in the ignored container begain to rot.

This experiment has been replicated many times. The following video is one of them:

Words, Intentions, Thoughts and Fear
Perhaps intentions, thought, written and spoken words are the reasons why the mainstream media continuously pounds us with fear-related stories because ultimately, when we live in fear, we eventually lose even more civil liberties.

Why do commercials always show extroverts? Why doesn’t anyone on TV recommend looking within?
Every ad shows some extrovert with his or her group of friends living the fictitious life that you should be living (through their eyes). And these people have above average looks and portray success, which subconsciously tell us that we are not good enough the way we are and if we want to be successful, beautiful and have friends like them, then we need to purchase whatever product they are selling.

Social visionary Duane Elgin sums it up for us, “The average person in the U.S. watches about four hours of television each day. Over the course of a year, we see roughly twenty-five thousand commercials, many of them produced by the world’s highest-paid cognitive psychologists. Their job is to figure out how to grab our attention and make us feel deficient if we don’t own their clients’ products. And these heavily produced advertisements are not merely for products, but for a lifestyle based on a consumer mind-set. What they’re doing, day in and day out, twenty-five thousand times a year, is hypnotizing us into seeing ourselves as consumers who want to be entertained rather than as citizens who want to be informed and engaged.”

One must also consider the reasoning why certain governments continue putting fluoride into the drinking water, despite numerous studies on how fluoride is a neurotoxin and is a main contributor to the calcification of the pineal gland. 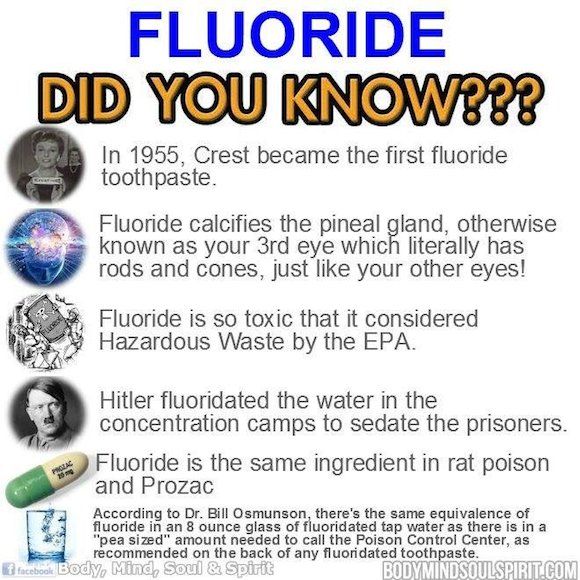 One final thing to think about: Your body is 90% water. Water has been proven to be influenced by intention & thoughts. Can you imagine the possibilities that you are capable of achieving?

About the Author:
Gregg Prescott, M.S. is the founder and editor of In5D and BodyMindSoulSpirit. He hosts a weekly spiritual show on In5D Radio and promotes spiritual, metaphysical and esoteric conferences in the United States through In5dEvents.

Copyright Information: Copyright in5d and Gregg Prescott, M.S.. This content may be freely reproduced in full or in part in any form.