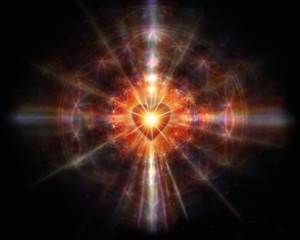 Simply stated, scientists were interested in exploring the nature of an electron and wanted to determine whether it was a particle or a wave. When they were in the room observing the electron, it behaved as a particle, which conformed to their expectations. When scientists left the room and were not observing the electron, but videotaped the activity, the electron behaved like an indiscriminate wave. Scientists concluded that the expectations of the researchers collapsed the wave function, changing it from probable wave states to particle-based fixed forms. They concluded that, indeed, the consciousness of the observer collapses the wave function.

So why are we concerned with what a particle may be doing or whether it is waving or not waving when we are not looking at it? When we understand that our observations and expectations actually influence the apparent behavior of reality, then we are empowered to actively play with interactive reality-creation. Reality is neither particle nor wave. It is both and neither simultaneously, and as co-creators with universal consciousness, we influence how reality shapes itself.

Likewise, in our continual observations of our reality, and ourselves, we repeatedly collapse the wave function into a state of sameness, or a state of no-change. We perceive through the same lens of awareness, and that collapses the wave function from various possibility states into the ones we have chosen to observe for ourselves. Our limited lens of awareness creates perceptual biases that filter what we are able to notice and experience.

The collapse of the wave function is what happens when we exercise choice. Consider that the field of consciousness potential is a coherent smear of infinite information and undifferentiated potential. Consciousness potential is all-inclusive and excludes nothing. Out of a coherent, undifferentiated infinite field, which is much like a motionless sea of potential, distinct possibility states well up as waves in the expanse that decoheres from the all into subsets. These subsets remain part of the all, but they have wavelike characteristics that are in motion and can be tracked by the intuitive right brain. From that state of decoherence, these possibility waves become even more probable in that some waves have more density or are more heavily weighted with information. Possibility waves that are more densely weighted become probability states that are then more likely to collapse. When we allow for choice to enter through the left brain logic frame of the observer, there is a collapse of the wave function from multiple probable states into actuality, much like a drop of water coalescing with the sand. Wave transforms into particle, as consciousness, through individual observation, collapses into wave function, and what is noticed is matter, form, and experience.

Collapse of Wave Function and Torsion Fields
Torsion fields are everywhere, even in our personal fields.[iii]
When we collapse the wave function from possibility to actuality as a defined personal perspective (particle of reality), this particle of electron-perspective has a spin (an angular momentum of perspective). Each perspective or particle spin creates a torsion field in its wake.[iv]

Our choices, thoughts, emotions, and consistently held states are available for others to resonate with, through torsion fields. This is perhaps why our personal thoughts, emotions, choices, and resonance can influence the world, which lends exciting understanding to Mahatma Gandhi’s famous proclamation, “You must be the change you wish to see in the world.”

When we become the change we wish to see, our individual body hologram of light emits torsion fields based on the spin of our particular electrons or personal vantage point. Change the spin, and you change what becomes more likely to occur for you and for the collective consciousness.

Our personal perspectives, which can change in an instant, have an effect that reverberates out to collective consciousness. This ripple effect has no limits in the same way universal consciousness is unlimited in its potential.

Playing in Waves Changes the Tide and Current
Some speculate that an uncollapse of the wave function happens naturally when we play. Play puts us in our hearts and enables us to bypass our linear, logical, analytical brain, which constructs reality based on what is familiar. The logical part of the brain compartmentalizes and segregates information. It sorts through information, based on similarities, by categorizing and organizing what it encounters. It notices what is the same, not what is different. This part of our awareness separates, identifies, and names. The linear, logical part of the brain, often referred to as the left brain, is a serial processor that is capable of tracking little more than a few bits of information at a time. As such, the left brain maintains order in reality by collapsing the wave function from multiple waves of possibilities into just one choice. Each choice seems to follow the prior choice in a linear, sequential fashion.

The reasoning left brain part of awareness decides what to perceive, based on what it already knows, and then only what is familiar is noticed and subsequently experienced. The left brain appears to be governed by a separative, particle-based reality. The left brain is the mechanism that chooses. It subjects its awareness to only the limited drop of water, which has separated out from the wave into the sand. The left brain collapses the wave function; perceiving with limitations, to see exactly what it expects to see.

When we learn to expand our awareness into a state of playfulness, beyond any expectations, agendas, or attachment to outcomes, beyond what we expect to see, beyond thinking, then we enter into the domain of right brain awareness. By perceiving via the intuitive right brain, we are able to readily uncollapse the wave function into various possibility waves that await our further recognition.

The intuitive part of our brain, often referred to as the right brain, is a parallel processor that is able to track and follow multiple waves of possibilities simultaneously. The right brain can track patterns of information as probabilities before they become actualized. The language of the right brain is symbolic in nature and is very pattern oriented. It can track and follow connections that typically are not captured by the segregating serial processing of the left brain. The right brain appears to be governed by waves of interconnecting grids of possibilities. It is able to follow many waves prior to their becoming droplets of choice in the sand.

By dropping down into the field of the heart, we enter into a coherent state of awareness, thus bypassing the segregation and limitations of the mind and accessing the totality of consciousness before the wave collapses.

We go directly to the sea of coherent potential that resides in the field of the heart. We tap into consciousness potential by connecting to the most authentic part of ourselves that knows itself as whole, limitless, timeless, and dimensionless. We leverage coherence within a unified field when we drop into heart-centered awareness. There is no doing from that state of heart-centered being. It is an altered state of consciousness that, when embodied, becomes a vehicle for a new reality based in unity, love, and limitless potential.

Dropping into the torus field of the heart is as easy as breathing. We usually do not think about breathing, and yet it happens. Similarly, we often do not notice when we are in or out of our heart space. Noticing heart-centered awareness assists us in consistently and effortlessly accessing a space of grace where transformation is most likely to occur.

About the Author: Melissa Joy is the President of Matrix Energetics International and is also the Co-Instructor of the Matrix Energetics system of transformation. She has played an integral role with the organization since 2007 and began co-teaching seminars with Dr. Bartlett in 2008. Melissa embodies the principles of Matrix Energetics and heart-centered living and epitomizes that change is readily accessible to anyone. She loves teaching Matrix Energetics and sharing this work with others.
Prior to Matrix Energetics, Melissa spent 13 years in the pharmaceutical industry. She realized that a career in marketing drugs was no longer meaningful to her. This began her exploration into holistic health and alternative medicine.
Her search led her to a Matrix Energetics seminar in 2006. Intrigued, she began her study with Dr. Bartlett that same year and attended every seminar offered. In 2007, Melissa partnered with Matrix Energetics to offer business and organizational expertise. That same year she became one of the first Certified Matrix Energetics Practitioners.
She has a BA in Psychology from the University of California at Santa Barbara. She also completed graduate studies at Pepperdine University’s Graziado School of Business and Management.
As a respected expert, Melissa teaches and is a sought-after speaker at learning facilities like The Omega Institute, and conferences such as The International Society for the Study of Subtle Energies and Energy Medicine (ISSSEEM), The Association for Comprehensive Energy Psychology (ACEP), The New Life Festival, The Conscious Life Expo, The What The Bleep!? European Conference, The IAK Congress on “Leaps of Consciousness” and others. Her written work has been published in notable publications, such as VISION Magazine, Wisdom Magazine, Natural Awakenings, EdgeLife, Aquarius: Sign of the Times, and others. She’s a frequent guest on radio programs and known for her accessibility on social media.
**Excerpted and Adapted from: “M-Joy Practically Speaking: Matrix Energetics and Living Your Infinite Potential” By Melissa Joy Jonsson**


Copyright Disclaimer under section 107 of the copyright act 1976, allowance is made for "fair use" for purposes such as critisicm, comment, news reporting, teaching, scholarship and research. Fair use is a use permitted by copyright statue that might otherwise be infringing. Non-profit, educational or personal use tips the balance in favor of fair use.
This article is not intended to provide medical advice, diagnosis or treatment. Views expressed here do not necessarily reflect those of IEMI or its staff.