John Telfer outlines his project exploring the interrelationship of cymatic phenomena and music.

Cymatic photographers, artists and experimenters display an amazing array of nature’s hidden art, the geometry carried by sound. Fascinating and inspiring, the hidden mysteries of life are revealed in dazzling displays of scientific wonder.

Ladies and gentlemen, if you have a golf-ball size consciousness when reading a book, then you will have a golf-ball size understanding. This is why it is crucial for you to broaden your minds. I am sure those of you who are reading this, have a broad mind and expanded consciousness. And by viewing the videos below, you will open yourselves to the reality and occult power of sound/music.

For those of you who do not know, Matter, is actually a poorly defined term in science. The term, Matter, is used in reference to a substance (often a particle) which has “rest mass”. Matter is also used loosely as a general term for the substance that makes up all observable physical objects.

Why is matter so vaguely defined? Because there is no matter, as such.

All matter originates and exists only by virtue of a force which brings the particle of an atom to vibration and holds this minute solar system of the atom together. We must assume that behind this force is the existence of a conscious and intelligent mind. This mind is the matrix of all matter.

The solidity of this world seems totally indisputable – as a fixed thing which you can see and touch. Your body seems also reassuringly solid. But, beginning with Albert Einstein, modern physics has assured us that this solidity is a mirage.

All physical matter, everything we have around us is actually the result of a frequency. And what this means is that if you amplify the frequency, the structure of the matter will change.

Oscillating a wine glass by playing sound at its resonance frequency, will cause it to move, change and liquify its structure and eventually even break it.

Sound is behind the manifestation of form and matter. Welcome to the study of visible sound and vibration, called Cymatics – allowing us to see into the otherwise hidden geometry in sound and the frequencies which form matter. Cymatic frequencies have an effect on texture, structure, water and more. We humans are made of over 70% water!


Sound is one of the sole factors which holds existence together. Sound is the basis of form and shape. Everything in existence is the result of a frequency.

We are told in school that in the beginning, was the word, and the word was God. We are told that this is how the world began and how creation took shape. 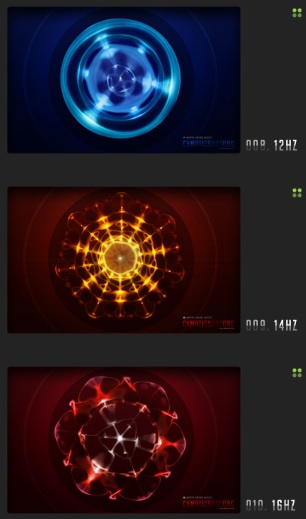 As shown in my website videos, what you previously thought were ancient sacred sites contain pretty carvings/images, are actually intelligent carvings/images depicting sound frequencies – cymatics! Therefore, geometric patterns all over the world have much meaning and significance.

The ancients knew much more than given credit for regarding life, the universe, astronomy, advanced mathematics, magic, magnetism, healing, unseen forces, etc. Encoded knowledge is and has been conveyed in plain sight, but as signs and symbols – which only the initiates would ever understand. Thanks to the works of those such as Manly P. Hall, Madam Blavatsky, etc and myself, you do not need to be initiated in secret societies to receive the secrets of the world.

The intangible aspects of our existence, such as emotions, are part of the true reality of higher consciousness. If emotions are part of a dimension that we cannot experience as part of our five senses (touch, taste, sight, hearing and smell), then how is it that we are all aware of our own emotions?

What most people believe to be emotions, are not truly the emotion itself. What we are experiencing is the physical manifestation of these emotions. Anger causes a disturbance in the psyche which manifests itself in the ego. These manifestations cause the heart rate to increase, body temperature to rise, and other physical traits which signify anger.

All other emotions branch off either directly or indirectly from these two emotions. Fear possesses a long and slow frequency vibration, whilst Love possesses a very rapid and high frequency. Again, Cymatics can reveal the vibrations forming the foundations of existence.

When the vibrations of sound are passed through a form of media, there is a set pattern that will follow. When the frequency increases, the media develops into a more complex pattern. This is precisely what is happening to earth and to humanity.

There are 64 possible codes of amino acids in human DNA structure, which are made from the four elements:

By any means of logic, we should have all 64 codes activated within our DNA structure. Yet, we only presently possess 20 active codes.

There is a switch that turns off and on, where those coding sites lay. And this switch is Emotion. Patterns of emotion have recently been discovered to be directly and physically linked to human genetics!

The Hollywood movie, Mission To Mars (2000), should now be watched again – showing Sound vs DNA vs “Our Past, Present & Future”!

Quantum physics has revealed what ancient masters knew long ago. That is, matter does not exist. The concept of substance arose from the philosophy of the Greek philosopher, Aristotle (384-322 BC). From this concept arose science’s conception of matter. The fact of the matter is, the substance of the universe is consciousness.

Quantum Physics has shown that space and time are illusions of perception. Therefore, our bodies cannot be a reality if they occupy this space.

Ernest Rutherford (1871-1937) was a New Zealand-born physicist and chemist who became known as the father of nuclear physics.

Ernest Rutherford performed an experiment in Manchester, England, that revealed to him the shape of the interior of an atom. Scientists were shocked to discover that the atom is almost entirely empty space. The question then became, how could this empty atom possibly make a seemingly solid space around us?